full circles & another trip around the sun…. 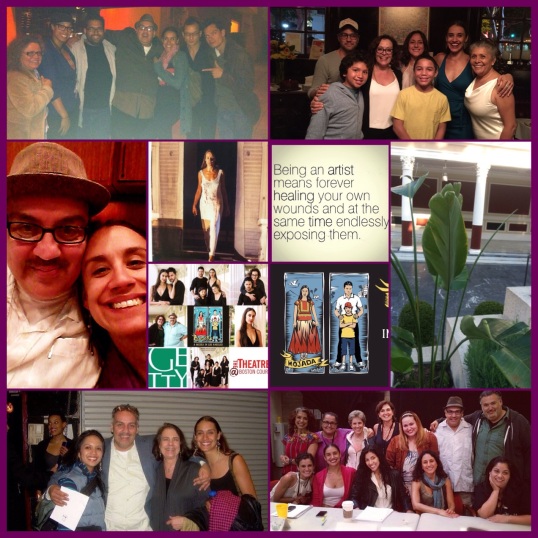 Before moving to Los Angeles my final production in Albuquerque, NM was Electricidad by today’s  birthday boy: Luis Alfaro. I had met him years earlier with my mother, who is also a MacArthur Genius Award recipient, but this was my first time tasting and spitting his words. Walking a stage through a strange and wonderful journey of blood, anger, family and fate.

After that Luis kept appearing along my path. He was teaching at USC where I was getting my MFA in acting. He helped cast me in a professional staged reading of a play by Megan Breen, directed by Juliette Carillo.(This is where Zilah Mendoza and I worked together for the first time and have since done two fantastic shows together: Water by the Spoonful where I first met VIVIS when she came to see the show and Mojada: A Medea in Los Angeles) My first show out of the gates was  El Nogalar by Tanya Saracho and Luis was the dramaturg. ( This was my first show with Justin Huen who played my “Hason” in Mojada) Next, I had a tough audition and two call backs before landing the role of Medea in Bruja, the first incarnation of Luis’ adaptation, at The Magic Theatre in San Francisco. I then booked a season at Oregon Shakespeare  Festival, and Luis was co-dramaturg on one of my two productions. I traveled to Dallas Theatre Center to play Jocasta in Luis’ Oedipus El Rey, (The role Marlene Forte originated in the Los Angeles rolling world premier at Boston Court) which completed my acting in all three of Alfaro’s Greek adaptations.

I then decided to move to New York. For three months I explored the Big Apple, but the west coast lured me back with 4 shows in a row, the final one being Mojada: A Medea in Los Angeles @ The Getty Villa, with VIVIS, Justin Huen, Zilah Mendoza, Marlene Forte and myself. Each of us having been in an Alfaro play, we knew how special this production was going to be…and it was! The circles came together, a story was told and a family  was born…

We just closed on Saturday, October 3rd and I just haven’t been able to face the completion of this show to write a final blog post on this production. Until today, Luis Alfaro’s birthday. This warrior guardian angel, slaying hearts with his mighty pen, infiltrating actors tongues with his bold words, tantalizing the ears and eyes of the scores of lucky audience and community members who watch his plays and/or hear him speak….

This generous Genius of an artist has been by my side for many years now, reappearing in various circles, his heart pushing mine, his words in my body and his stories in my soul. He is a National Treasure, a Global Gift, a Universal Superman of Storytelling. He has connected me with theatre family across the country, supporting so many of us along our path as creative artists and artistic community members.

Happy birthday Maestro, my dear friend and inspiration. I am so grateful to have you in my life and in my heart. I look forward to your future Facebook stories and more chances to dive deep and chew on our craft together. Enjoy this next trip around the sun, it will be glorious!

I love you… Tlazocamati ❤️