A Tale of Two Jocastas….

“Dallas is the hottest Latino show on TV. We have seven Latinos working on the show!” Marlene Forte speaking about the cast of Dallas

This past Tuesday I had the honor of visiting the set of Dallas! The Incredible Marlene Forte, who stars as Carmen Ramos in the show, invited me to watch her work. They were filming a funeral scene at the Greenville Cemetery and luckily it was a beautiful warm sunny day. We had been dealing with really cold weather for many weeks, so being outside in the sunshine was a treat. As soon as we arrived to the cemetery, I took two of my cast members of Oedipus El Rey with me, everyone was very kind and helpful. We were greeted and shown to three directors chairs where we could chat with Marlene and mingle with the cast in between shots. It was hard not to get star struck, these young, gorgeous TV stars have their faces plastered all over the country. The show is premiering it’s third season on Monday. We got to meet a majority of the cast including Patrick Duffy, who happened to be directing the episode we were watching them shoot. The entire cast and crew were incredibly nice. We watched them shoot for a couple hours before they broke for lunch and then the set was cleared and we headed back home for a nap before our evening performance. That night Marlene was coming to see our show! 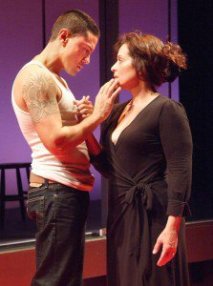 I first met Marlene Forte at The University of Southern California where her husband Oliver Mayer teaches and where I was working on my MFA in Acting. We had the honor of working together, along with an incredible cast of women, on SEVEN, a documentary play produced for one night at the University of Southern California a year after I graduated in 2012. However, I had first seen her perform in the role that I am now doing: Jocasta in Oedipus El Rey.

To say that I was nervous or excited to perform a role in front of someone who had done it before doesn’t quite capture the feeling. As I sat back stage waiting for my cue I could feel a huge sense of responsibility, energy and emotion. I realized that I was a member of a lineage of Luis Alfaro’s Jocastas, and that is an amazingly talented group of women! Stepping out on stage I knew that I was continuing a tradition of honoring a story that had been told by artists before me, and will continue to be told for decades after me. The combination of “staying in the moment” and feeling this ancestral connection was exhilarating. Usually I am not able to see too clearly who is sitting where in the audience. But when I first stepped on stage my body sensed where Marlene was sitting. I could hear her boisterous laughter throughout different moments of the play and could only imagine what a trip it was to watch the production four years after she had performed it at Boston Court.

After the show Marlene whisked me away for a drink on the patio of Lark on the Park. We walked from the theater and the whole way we chatted about the show, her show, my show, our show. She reminded me of how different the ending was, since Luis had reworked the play in Chicago, after the LA production. We had a fantastic girls night along with another actress from the Dallas cast. We chatted about growing vegetables in Los Angeles, shared our favorite T.V. shows and stories about engagements. We walked back to her car and she took us home. She had told me at lunch that day that even though she thinks I am too young for the role, that I have an old soul and she knew I could do it. Before I got out of the car she told me “You got her, you got her heaviness.” She gave me her blessing, and I soaked it up and walked to my apartment with a huge smile on my face.

To have a role model share her work with you, come watch your work and then take you out for drinks, wow, priceless is the only word to describe it. I will be forever grateful for this night where two Jocastas shared the space and an ancient story was told.

Click HERE to read a great interview of the fabulous Marlene Forte!