You Never Can Tell: Beginnings…

Look at this cast! Aren’t they all gorgeous? I am sure many of you theatre artists reading this are connected to one or more of these fine folks, because that’s how it works doesn’t it? We are all part of a huge, loving, hard working, kick-ass family of beings who live to tell stories… And here we are beginning a new adventure!

What a treat to be back in the Bay Area, creating some magic in a room with these artists! At the Helm of our Shaw Ship is Lisa Peterson, who was recently named Berkeley Rep’s Associate Director! Her Shavian knowledge, fantastic laugh and sharp eyes keep all of us on our toes as she sculpts our world and our words… This is my first time performing a G.B.S. play and I couldn’t imagine doing it with anyone other than Lisa, and did I mention the jaw-dropping setting? The outdoor theatre in the golden Orinda hills and eucalyptus groves is a treat to the senses…

I’ve had many beginnings in The Bay Area… This sunny gray climate has influenced so much hunger and desire and excitement in my continued search for my role(s) as an artist in this world. Walking the streets of San Francisco, Mountain View, and now Oakland and Berkeley have informed my work and I have always been impressed with the tenacity and big heartedness of Bay Area artists, there is a truth that seeps from their every move…

My very first Equity gig was in San Francisco at The Magic Theatre, diving head first into Luis Alfaro’s adaptation of Medea with director Loretta Greco pushing me to the depths of the deep end, day after day. That show began my career as a professional Regional Theatre Actor. In fact, I was in rehearsals for that play when I self taped an audition that booked my first season at The Oregon Shakespeare Festival. Since then I have traveled to different states to tell stories, standing on various stages, forming lifelong bonds and connections. Two years ago this month, I met my love, Miles Gaston Villanueva in the Bay Area. We laid eyes on each other for the first time in a rehearsal room for the  TheatreWorks production of Water by The Spoonful. That show was the beginning of a creative and loving relationship with an incredible soul, a man who has challenged and loved me through our passion for art and who makes my heart smile…

Sabina Zuniga Varela as “Yaz” and Miles Gaston Villanueva as “Elliot” in the 2014 Theatre Works production of Water By The Spoonful by Quiara Algeria Hudes. (Photo by Kevin Berne)

On July 26th our wonderful cast and crew celebrated Shaw’s 160th birthday with a potluck after rehearsal. The table was laden with homemade goodies and tasty treats. We sang happy birthday and toasted to the man whose words and thoughts we are beginning to taste and share…

Tomorrow we have our first run through!

We will begin to piece it all together using our words, bodies, hearts and breath on that rehearsal room floor as we struggle and swim through the four acts of You Never Can Tell. There are big ideas, quick wit, moments of giddiness, tension, desire, confusion and recognition. The language is fast and the thinking is deep. All three women in the play, a mother and her two daughters, are strong in their decisions, words and thoughts. It’s a thrill to begin to explore the complexity of my character Gloria, finding what reminds me of myself, what surprises me, what confuses. She is raised by a very progressive mother, Mrs. Clandon, and has been educated to challenge the norm at that time, as you can read in this exchange that happens in Act One:

McCOMAS. You hold to your old opinions still?

MRS. CLANDON. As firmly as ever.

McCOMAS. Bless me! And you are still ready to make speeches in public, in spite of your sex (Mrs. Clandon nods); to insist on a married woman’s right to her own separate property (she nods again); to champion Darwin’s view of the origin of species and John Stuart Mill’s essay on Liberty (nod); to read Huxley, Tyndall and George Eliot (three nods); and to demand University degrees, the opening of the professions, and the vote for women as well as men?

MRS. CLANDON (resolutely). Yes: I have not gone back one inch; and I have educated Gloria to take up my work where I left it.

While rehearsing this play I am drawing on the strong women that I have been exposed to and influenced by in my life: my mother Maria Varela, Gloria Steinem, Ella Baker, Sandra Cisneros, Winona LaDuke, Chavela Vargas, Frida Kahlo… the list goes on and on (Click on each name for videos to hear their words and see their faces.) Each of these women have challenged what was expected of them, they’ve created, they’ve fought, they’ve spoken up, they’ve resisted. Many of them have not stopped, they continue to shed light on issues at hand and persist in the struggle. They began and I must continue….

I thought of these strong women, and the women in our play, as I watched Hillary Rodham Clinton accept the nomination at the DNC this week. We are working on themes that are very timely with the historic nomination of the first woman as the presidential candidate for a major party in our country: Feminism, Marriage, The New Woman, Family, Convention, Relationships, Class, The Life-Force and Love. Regardless of any qualms with Hillary, this is a moment in history, or should I say Herstory…. (BTW, if you missed any of the DNC speeches check them out HERE on C-Span!)

George Bernard Shaw wrote his women well, after all his mother Bessie was quite intriguing and his childhood was a trip to say the least…. I am learning more about his mother and the beginnings of Shaw’s search for his calling in a highly recommended biography by Michael Holroyd: Bernard Shaw, Vol.1:18:56-1898-The Search for Love, I am hoping to finish it by the end of the run…

So, on the last day of this month we begin the head-first dive into the deep end of our play with our first run through. It’s absolutely terrifying and thrilling at the same time, this work we do. We are traveling through an abyss of stakes, cues, props, music, dancing, connecting, entrances, exits, all in the search for what we love: telling stories.

And next week, we begin Tech… 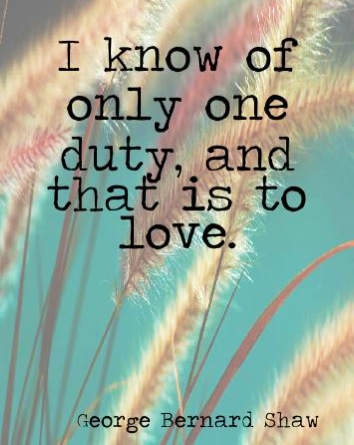